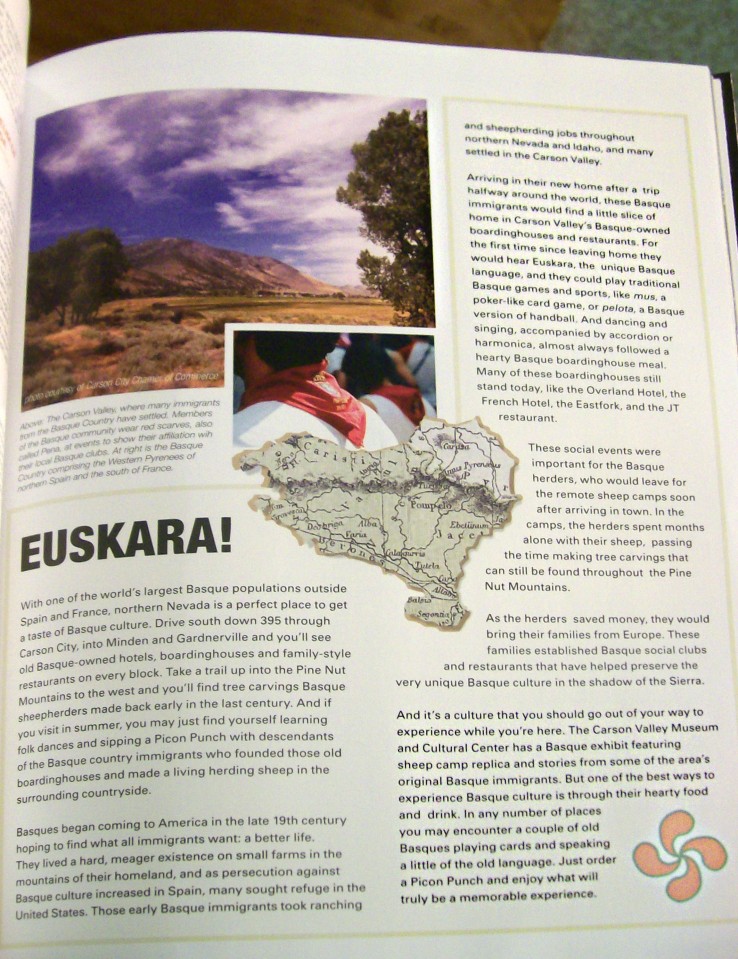 “With one of the world’s largest Basque populations outside Spain and France, northern Nevada is a perfect place to get a taste of Basque culture. Drive south down 395 through Carson City, into Minden and Gardnerville and you’ll see old Basque-owned hotels, boardinghouses and family-style restaurants on every block- Take a trail up into de Pine Nut Mountains to the west and you’ll find tree carvings Basque sheepherders made back early in the last century. And if you visit in summer, you may just find yourself learning folk dances and sipping a Picon Punch with descendants of the Basque country immigrants who founded those old boardinghouses and made a living herding sheep in the surrounding countryside.

Basques began coming to America in the late 19th century hoping to find what all immigrants want: a better life. They lived a hard, meager existence on small farms in the mountains of their homeland, and as persecution against Basque culture increased in Spain, many sought refuge in the United States. Those early Basque immigrants took ranching and sheepherding jobs throughout northern Nevada and Idaho, and many settled in the Carson Valley.

Arriving in their new home after a trip halfway around the world, these Basque immigrants would find a little slice of home in Carson Valley’s Basque-owned boardinghouses and restaurants. For the first time since leaving home they would hear Euskara, the unique Basque language, and they could play traditional Basque games and sports, like mus, a poker-like card game, or pelota, a Basque version of handball. And dancing and singing, accompanied by accordion or harmonica, almost always followed a hearty Basque boardinghouse meal. Many of these boardinghouses still stand today, like the Overland Hotel, the French Hotel, the Eastfork and the JT restaurant.

These social events were important for the Basque herders, who would leave for the remote sheep camps soon after arriving in town. In the camps, the herders spent months alone with their sheep, passing the time making tree carvings that can still be found throughout the Pine Nut Mountains.

As the herders saved money, they would bring their families from Europe. These families established Basque social clubs and restaurants that have helped preserve the very unique Basque culture in the shadow of the Sierra.

And it’s a culture that you should go out of your way to experience while you’re here. The Carson Valley Museum and Cultural Center has a Basque exhibit featuring sheep camp replica and stories from some of the area’s original Basque immigrants. But one of the best ways to experiences Basque culture is through their hearty food and drink. In any number of places you may encounter a couple of old Basques playing cards and speaking a little of the old language. Just order a Picon Punch and enjoy what will truly be a memorable experience”.